What Side is Your Appendix On? How Can You Recognise Appendicitis

Have you ever wondered what side is your appendix on? The appendix is a small organ that is situated on the lower right side of the abdomen.

It is a pouch-like organ and is connected to the intestine. In this article we will try to find the answers to the following questions:

No doubt, there are other things that can be responsible for right-sided abdominal pain. But you should never avoid this kind of excruciating pain that causes nausea, vomiting, or fever.

Avoiding this can result in more complicated problems. An appendix takes about 48 to 72 hours to rupture after the symptoms of appendicitis have started to show.

What Side is Your Appendix On?

According to Dr. Carol DerSarkissian on WebMD, the appendix is situated where the small intestine and the large intestine meet in the lower right abdomen.

To know exactly what side is your appendix on, you should be able to find the top of your right-hand hip bone on the front of your body.

Put your thumb on the top of your right hip bone and place your little finger on the edge of your pubic bone. Extend your index finger, and this should exactly be where your appendix is located.

The location of your appendix is called McBurney’s point, and it is two-thirds in the distance from the belly button to the hip bone on the right side of your body. To remove the appendix, when surgeons make an incision, it is called “McBurney’s incision.”

What Does Your Appendix Do? Purpose of Appendix

Doctors are still not clear as to what is the function of the appendix in the body. In older children and adults, the appendix doesn’t seem to have a crucial part to play, but according to Dr. Melissa on MedicineNet, the appendix is said to be connected to the child’s immune function.

Just like doctors are unclear as to what the appendix is for, they are confused about the reason why it bursts. According to Dr. Carol DerSarkissian on WebMD, the appendix stores good bacteria to help build the digestive system after it’s suffered from gastrointestinal illnesses.

The only way to treat an inflamed appendix is by an appendectomy, that is, the removal of the appendix or by treating any infection in the abdomen.

Researchers and experts have been performing research for several years on what exactly is the purpose of the appendix. Most researchers believe that the bacteria that get flushed out of our stomach because of an infection get collected in the appendix.

These bacteria are then used for fighting infections in the body. If you do not have an appendix in your body, then you are more prone to catching infections as your body lacks the good bacteria and has more bad bacteria.

What Side is Your Appendix On? Appendicitis Pain Location

One of the most common first symptoms of appendicitis is a pain in the lower right side of the abdomen.

However, at the early stages of appendicitis, it can be challenging to distinguish appendicitis from other causes of abdominal pain.

Doctors suggest that appendicitis takes place when the appendix catches an infection. The bacteria cause inflammation in the appendix, and the appendix swells up with pus.

This causes the pain to get worse, and if not treated in time, it can burst, and the infection can spread from the lower right abdomen to the rest of the stomach.

Doctors also say that pain from appendix starts off in the middle of the abdomen and comes and goes, but later on it intensifies and advances to the lower right side of the abdomen.

In such a condition, you will realize that so much as walking or even coughing will make the pain the lower right abdomen worse.

What Side is Your Appendix On? Appendicitis Symptoms 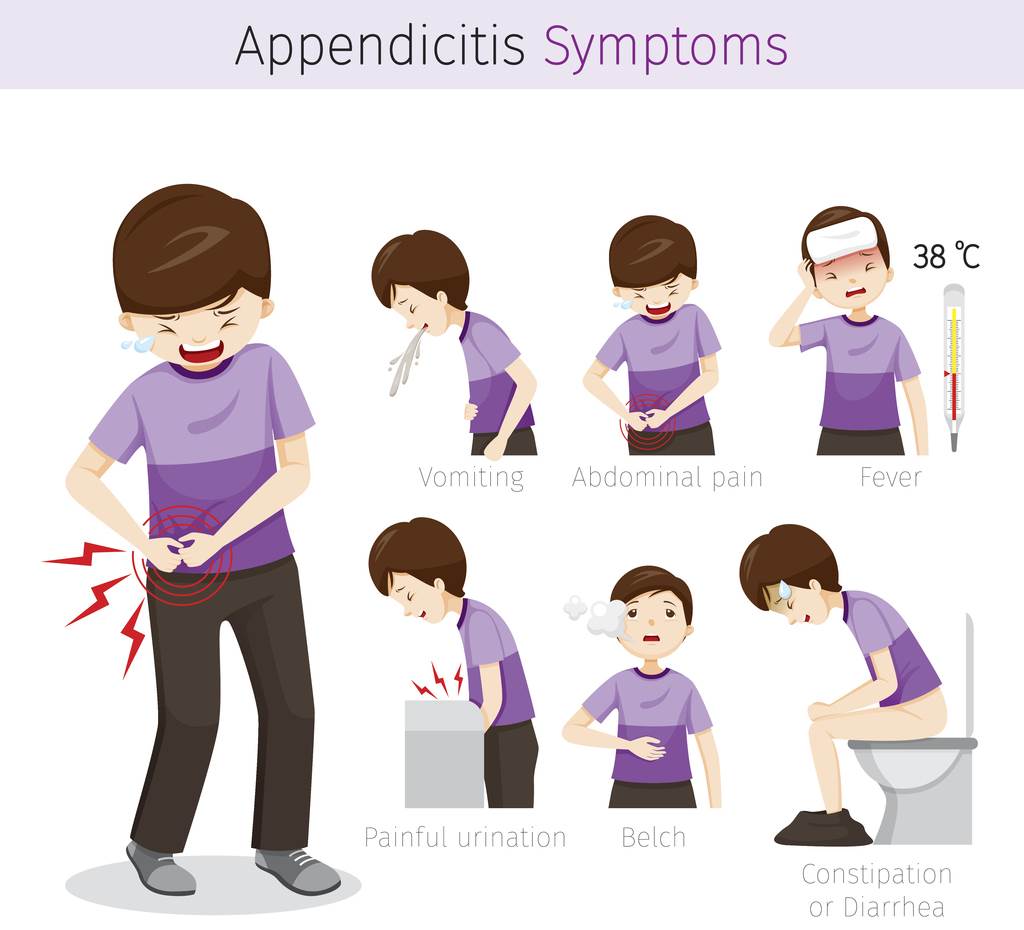 Knowing what side is your appendix on can help in identifying its symptoms and get it treated before the situation gets out of hand.

Here are some of the symptoms that are warning signs of appendicitis.

Even though the appendix is situated on the right side of the abdomen, the first sign of appendicitis would be the pain in the middle of the abdomen and around the navel area. It usually starts off as the belly button pain and then escalates to your right side.

Right-side stomach pain: Doctors say that the pain will be severe on the right side of your abdomen and it gradually gets worse over 6-24 days. The right-abdominal area will be soft to touch coughing may cause abdominal pain.

Because the bacteria is building up and your body is trying to fight the infection, you might develop a fever.

However, you may get a fever because of some other infection in your body. Appendicitis is not the only cause of a fever.

The infection will cause vomiting or nausea which will leave you feeling unwell. Doctors say that nausea usually starts around the same time as the pain starts.

Inflammation in the appendix might irritate the ureter causing a consistent need to pee. It might also burn when you pee.

Appendicitis affects kids more than adults. However, symptoms of this disease in kids are different from symptoms usually seen in adults. In kids:

Some less common warning signs are as followed:

How is Appendicitis Diagnosed? 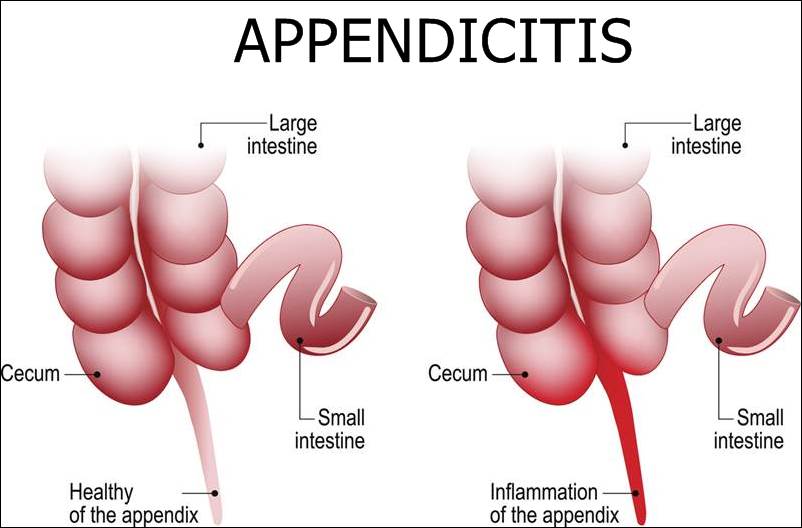 It is extremely important to diagnose appendicitis since it is a medical emergency. More often than not, the doctor will find the exact location of the appendix on the right side of the abdomen and run some tests.

The doctor will push the area between your hip bone and the navel to check if there is tenderness. They also check for “rebound tenderness”- this is when sharp pain is felt when the pressure from the affected area is quickly released.

Some remedies for appendicitis are as followed:

Castor oil is an effective home remedy for appendicitis. A castor oil pack will help relieve the blockage and lessen inflammation. If castor oil is consumed orally, it might help with constipation and improve bowel movements.

A castor oil pack can be prepared by folding a large flannel cloth into layers and pour two tablespoons of castor oil on it.

Press the large flannel cloth on your abdomen. Repeat this process three times a week for two to three months.

Garlic has anti-inflammatory properties that help in the treatment of appendicitis. It helps relieve the pain as well as inflammation.

You can eat two to three raw garlic cloves on an empty stomach daily. You can also take garlic capsules, but you should only do this after consulting your doctor.

Ginger, along with reducing pain and inflammation, relieves the common symptoms of vomiting and nausea.

Drink ginger tea two to three times a day. Or you could also apply ginger oil on your stomach a few times daily.

Fenugreek seeds are efficient in treating appendicitis. These seeds prevent intestinal waste and excess mucus from accumulating which reduces the probability of the problem becoming worse.

Add two teaspoons of fenugreek seeds to one cup of water. Boil the water and then keep it on low heat for ten to fifteen minutes. Strain and have this chowder a few times daily.

What Side is Your Appendix On? Can You Prevent Appendicitis?

Dr. Laura Martin on WebMD says that cutting down on processed sugar and food and increasing fiber intake by consuming fruits and vegetables can solve a lot of digestive problems.

But there is no direct link between our diet and appendicitis, and there are no definite ways by which one can prevent appendicitis.

When to See Doctor?

Unbearable pain in the right side of the abdomen where the appendix is located can be a red warning sign that you should go and see your doctor.

You should call your doctor if you experience abdominal pain along with a fever and vomiting. This is specifically important when the abdominal pain lasts for more than four hours.