WHAT ARE THE HEALTH BENEFITS OF GINGER? 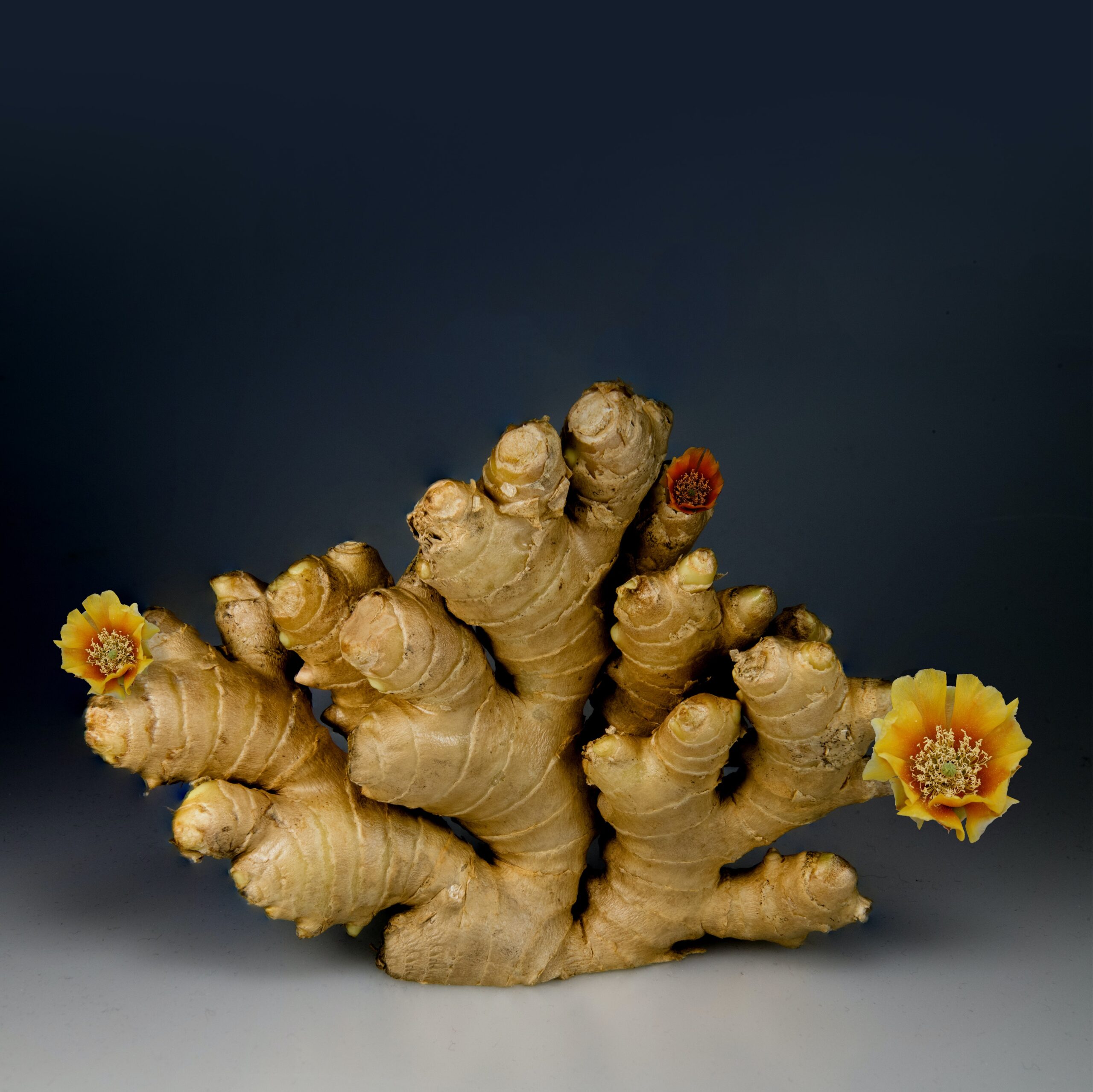 Ginger contains insignificant amounts of vitamins and minerals. Since it is eaten in small quantities, people generally don’t get many nutrients. However, the unique compounds within ginger are thought to be the primary source of its health benefits. In this article, we will cover a brief history of ginger, how it was first used and its nutritional value, and then cover the many health benefits associated with it, finishing off with a few easy recipes and tips to help you incorporate ginger into your daily routine.

So let’s get into it.

A Brief of History of Ginger

Ginger is the spicy and flavourful root of the flowering plant Zingiber officinale. The rhizome (underground part of the stem) is the part commonly used as a spice. It’s often called ginger root or, simply, ginger.

Commonly used to season food, it can be used fresh, dried, powdered, or as an oil or juice. It’s a very common ingredient in recipes, but it also has a long history as a folk medicine treatment for multiple ailments.

The known history of ginger dates back about 5000 years. Although the exact origins of the plant are unknown, ginger is likely native to Southeast Asia. The medicinal and spiritual uses were first documented in Southeast Asia, India and China. People in India and China have used ginger as a spice since ancient times. Traders brought ginger to the Mediterranean, Europe, and the Americas.

Like many other spices, ginger was once a costly commodity. In the 14th century, a pound of ginger cost as much as one sheep! By the middle of the 16th century, Europe received more than 2000 tonnes of dried ginger a year from the East Indies. In the Middle Ages, people used it to ward off the plague, and for a while, it was so popular that it was placed on the table like salt and pepper. In 19th century Britain, it was even sprinkled in beer (the source of ginger ale).

Ginger contains insignificant amounts of vitamins and minerals. Since it is typically eaten in small quantities, people don’t get many nutrients. However, the unique compounds within ginger are thought to be the primary source of its health benefits. These include gingerol, shogaols, zingiberene, and zingerone.

Because ginger has been so widely used in traditional medicine, there have been and are scientific studies examining its medicinal value. Research suggests that including ginger in your diet provides multiple health benefits.

Certain chemical compounds in fresh ginger help your body fight germs. These compounds are especially good at halting the growth of bacteria like E.coli and shigella, and they may also keep viruses like RSV (respiratory syncytial virus) at bay.

Active compounds in ginger called gingerols prevent oral bacteria from growing. These bacteria are the same ones that can cause bad breath and periodontal disease, a severe gum infection.

Ginger helps to ease a queasy stomach, especially during pregnancy. According to a review of 12 studies that included 1,278 pregnant women, 1.1–1.5 grams of ginger can significantly reduce symptoms of nausea. However, this review concluded that ginger did not affect vomiting episodes.

It may work by breaking up and removing built-up gas in your intestines. It might also help settle seasickness or nausea caused by chemotherapy. Although ginger is considered safe, consult your health care provider before taking large amounts during pregnancy. It is also recommended that pregnant women who are close to labour or who’ve had miscarriages avoid ginger in large quantities. Ginger is also contraindicated in women with a history of vaginal bleeding and clotting disorders.

Ginger is no magic wand that will whisk away muscle pain instantly, but it may lessen soreness over time. Some studies have shown ginger to reduce the muscle aches induced by exercise. People who took ginger after exercise had less pain the next day than those who didn’t.

The anti-inflammatory properties of ginger help reduce swelling, making it an excellent addition to Osteoarthritis treatment regimes. Osteoarthritis is a common health problem that involves degeneration of joints, leading to symptoms such as joint pain and stiffness. One literature review found that people who used ginger to treat their Osteoarthritis saw significant reductions in pain and disability. Study participants received 500 milligrams (mg) to 1 gram of ginger daily for 3 to 12 weeks. Placing a ginger compress or patch directly on the affected joint might also provide relief.

A few small studies showed that bioactive molecules in ginger may slow down the growth of some cancers like colorectal, gastric, ovarian, liver, skin, breast, and prostate cancer. But much more research is needed to see if this is true.

A small study suggested that ginger may help your body use insulin better. However, more extensive studies are needed to see if ginger could help improve blood sugar levels significantly.

Ginger powder may help to ease period pain. In a few studies, women who took 1,500 milligrams of ginger powder once a day for three days during their cycle felt less pain than women who didn’t. In addition, the symptoms were controlled better when the women took the ginger in the few days preceding menstruation.

Chronic indigestion is characterized by recurrent pain, discomfort in the upper part of the stomach, heartburn, and flatulence. Ginger before meals may speed up the emptying of the stomach, thus reducing the chances of indigestion. It is believed that delayed emptying of the stomach is a significant driver of indigestion. Interestingly, ginger has been shown to speed up stomach emptying. People with functional dyspepsia, which is indigestion with no known cause, were given either ginger capsules or a placebo in a small 2011 study. One hour later, they were all given soup. It took 12.3 minutes for the stomach to empty in people who received ginger. It took 16.1 minutes for those who received the placebo.

These effects have also been seen in people without indigestion. In a 2008 study by some members of the same research team, 24 healthy individuals were given ginger capsules or a placebo. They were all given soup an hour later. Consuming ginger as opposed to placebo significantly accelerated stomach emptying. It took 13.1 minutes for people who received ginger and 26.7 minutes for people who received the placebo.

12. It May help with weight loss

The evidence in favour of ginger’s role in helping prevent obesity is more robust in animal studies, though. Rats and mice who consumed ginger water or ginger extract consistently saw decreased body weight, even when they’d also been fed high-fat diets. Ginger’s ability to influence weight loss may be related to specific mechanisms, such as its potential to help increase the number of calories burned or reduce inflammation.

13. It may improve brain function and protect against Alzheimer’s disease.

Oxidative stress and chronic inflammation can accelerate the aging process. Although the exact cause and prevention of Alzheimer’s are studied continuously, the above mentioned are believed to be among the key drivers of Alzheimer’s disease and age-related cognitive decline. Some animal studies suggest that ginger’s antioxidants and bioactive compounds can inhibit inflammatory responses that occur in the brain. There’s also some evidence that ginger can help enhance brain function directly. For example, in a 2012 study of healthy middle-aged women, daily doses of ginger extract improved reaction time and working memory. In addition, numerous animal studies show that ginger can help protect against age-related decline in brain function.

Ginger is ideal for lightening scars and exfoliation of the skin. It is a potent anti-acne treatment also.

15. Reduces the Risk of Heart Attack

The antioxidants in ginger are believed to reduce the risk of a heart attack potentially, but Oluranti Familoni, professor of cardiology at the Olabisi Onabanjo University in western Nigeria, said while ginger has certain health benefits, it cannot singularly prevent heart attacks and strokes.

“Ginger contains many things, some of which are antioxidants. Lots of antioxidants are naturally occurring, but antioxidants alone will not prevent heart attack,” he said.

Here are a few easy ways to use ginger daily, from a skin exfoliation mask to an anti-inflammatory patch.

Before we go further, just a note:

Like all other vegetables and fruits, you can juice fresh ginger using an electronic juicer. Wash and cut away any bad spots before juicing.

You can find two great juicer options below that do the job for you.

Using a Food Processor or Blender

Wash and then peel the ginger. Then cut them into rough chunks, enough to blend in a blender or food processor easily. Blend it with a cup of water until it is thick and pasty. Then, add some warm water and sieve using a cheesecloth to extract the juice.

You can look at some best selling blenders below

If you don’t have a blender or juicer, you can juice the ginger using a box grater. Shred the ginger directly on a cheesecloth set over a bowl to catch all the juice, and then squeeze the juice out from the shredded ginger. If preferred, add water as described above.

Mix 1 teaspoon fresh, grated ginger with the juice of half a lemon and one tablespoon honey into 200ml hot water.

Alternatively, you can add the fresh ginger to your favourite cup of tea and let it steep for a few minutes before consuming it.

Apply a mixture of ginger juice and yoghurt to your skin. Leave it on for 15 minutes and rinse off with warm water.

Combine ginger juice and honey and apply the mixture to the affected areas. Leave it on for about 15 minutes, and then rinse off with warm water.

Using 1 cup of fresh ginger (chopped or grated) blend until a thick paste is created, add a quarter cup of water, if needed, and mix well. Take a piece of thick gauze bandage, the size of the inflamed area, smear the ginger paste on it and cover it with another bandage to secure it in place. Change the patch as often as required.

Most of the benefits referenced in this article still need further scientific studies to prove their efficacy.

All supplements, natural or otherwise, should be used in consultation with your health care provider and should never be viewed as a total replacement for treatment prescribed by your knowledgeable health practitioner. Supplements are just that – supplementing prescribed treatment or supplementing diet deficiency.

The Many Health Benefits of Eating More Ginger. It all comes down to a powerful disease-fighting nutrient.

Health Benefits of Ginger Reviewed by Melinda Ratini, DO, MS on November 06, 2020, WEBMD