What Causes Spotting After Period?

Spotting after period happens for many reasons, and it depends on the different stages in a woman’s life. It can cause some worry because women expect the bleeding to be over until the next period. Thankfully, it doesn’t always indicate any severe health condition when you see the light pink spotting after your period is over. However, if you see a bleeding during pregnancy, you should see your doctor.

This article contains information on common causes of spotting between the periods, prevention methods, and when to seek a medical help.

What Causes Spotting After Period?

There are many causes for abnormal vaginal bleeding. Spotting after period can be a sign of pregnancy, hormonal imbalance or a result of the birth control methods. Following are some common reasons why you see spotting after your period is over: 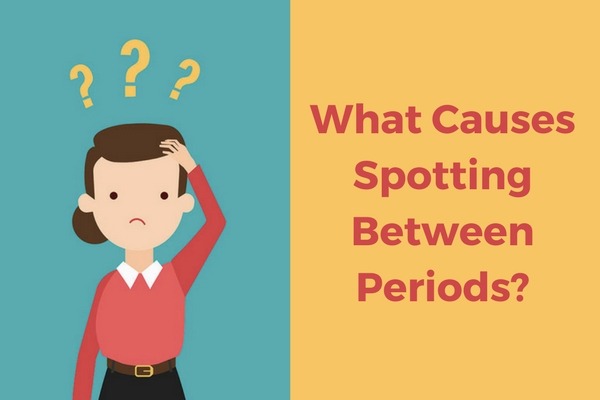 The light spotting after period could be from ovulation. Women start ovulating 1-2 weeks after menstrual cycle. It is due to a natural dip in estrogen levels. It happens to 1-2% of women after the mature egg appears near the ovulation cycle.

The birth control measures that contain hormones can cause mid-cycle bleeding. The spotting happens during the first few months when you start taking the birth control pills.

The contraceptive pills and intrauterine device (IUD) are the most common birth control methods that prompt spotting. These methods cause the suppression of the menstrual cycle. Missing a daily pill could prompt the sudden release of menstrual blood, and in the case of IUD, the spotting could happen at any time.

Hormonal imbalance can also cause spotting after period. The malfunction happens with 1 or more types of hormones. Too much estrogen or progesterone can prompt spotting right after the period is over. The dependent variable regarding hormone balance is the menstrual cycle.

Physical and emotional stress can cause pink or brown spotting. It is one of the common causes of missed or late periods according to Dr. Melissa Stöppler on MedicineNet.

Three types of female reproductive system cancers could cause spotting after period. Those cancers are cervical cancer, cancer of the ovaries, and uterine cancer. Seek proper medical attention if you have gone through menopause. Spotting does not always mean cancer, but it is best to consult with doctors if periods are heavier than usual.

Cysts can grow on the ovaries as part of the menstrual cycle. These can cause spotting if they become too big and rupture. The growth of these cysts can also produce pain, bloating, and pain during bowel movements.

An under active thyroid is also called hypothyroidism. Low thyroid hormone count is the cause of this condition. Symptoms of hypothyroidism include tiredness, dry skin, and changes to the menstrual cycle.

PID is a bacterial infection that comes from sexually transmitted diseases. Symptoms of PID include vaginal discharge, lower pelvic pain, and irregular vaginal bleeding. The irregular bleeding happens as a result of infected ovaries, uterus, and fallopian tubes.

Uterine fibroids are harmless tumors that grow on the vaginal wall. Spotting after a period is a common symptom of this condition. Lower back pain, pelvic discomfort, bladder issues, and painful periods are other symptoms of uterine fibroids.

Uterine Incapacity is when the uterus is not able to release all menstrual blood during the period. The “old blood” is retained and released a few days after the period. Post period cramping is another sign of uterine incapacity.

These are the growths that appear at the opening of the cervix. Causes of cervical polyps include hormonal imbalance or inflammation of the cervix. These commonly show up during pregnancy due to the increased levels of estrogen.

As mentioned earlier, one of the early signs of pregnancy is implantation bleeding. This type of spotting occurs after the fertilized egg places itself on the walls of the uterus. The placement happens 6-7 days before ovulation and a few days before the next period.

Mid-Cycle Spotting: Different Signs and What They Mean?

The unusual spotting can happen anytime between the periods. Following are the different patterns of spotting after period:

1. Dark Red Bleeding After the Period

It is normal if light bleeding happens after a period. It becomes a concern if there is smelly discharge or vaginal itching.

There are a couple of other causes of dark red spotting after period. One of the reasons is implantation. When pregnancy occurs, it is normal to see light spots due to implantation cramping. If the spotting is heavy, the period may have started.

2. Pink Spotting Right After the Period is Over

There are various reasons for light pink spotting right after a period is over. One of the reasons is uterine incapacity. Another reason is a weak uterus when it does not have the strength to shed the blood.

In this case, the blood appears a couple of days after the period. You may see the pink spotting right after the period if the blood mixes with vaginal discharge. Lastly, rough sexual intercourse can irritate the vagina and produce light spotting.

3. Pink Spotting 4 Days After the Period

4. Light Pink Spotting a Week After the Period

Light pink spotting a week after the period does not mean pregnancy. Ovulation has not started in this case. Though, it could mean ovulation is about to start.

How to Prevent Mid-Cycle Spotting?

Following are some natural ways to prevent the spotting after period or mid-cycle bleeding.

Maintaining a healthy weight can help control the spotting. Women who are either underweight or overweight have more issues with abnormal vaginal bleeding. Eat in smaller portions and avoid sugary drinks like sodas, juices, etc to stay fit and healthy.

Women who are taking hormone pills should take these as directed and at the same time every month. Check with your doctor for dosage guidelines.

Spotting after the period is a symptom of high stress. Using healthy coping mechanisms and relaxation exercises reduces the chance of spotting. Keep away from the stressors, eat a healthy diet and get enough sleep to manage the stress.

NSAIDS, such as ibuprofen, reduces menstrual bleeding. The recommended dosage is 400 milligrams every 6 hours from the beginning of the period to the end. There are precautions to follow while taking NSAIDs:

When to Call Your Doctor?

Professional medical attention is needed if the individual is under 11 or postmenopausal. It is also recommended to call a doctor if there is heavy bleeding between periods.

It is common for women to notice the spotting after period at some point in their lives just as long as the bleeding is not heavy and stops after a few days.

Irene is a health and fitness consultant based out of Albuquerque, NM. She was a personal trainer during the years of 2010-2013. She holds a Bachelors of Liberal Arts with a focus on creative writing from The Evergreen State College. She obtained her personal trainer license through Seattle Central College in 2010. Irene has been an athlete since childhood. She currently train and compete in ultra-marathon running and jiu jitsu. She started health writing in 2009 as a hobby through her personal blog. She believes that people can seek help from a trainer or trained profession to reach fitness and health goals. Though, people can learn a lot about them and promote self-sufficiency if they had affordable resources. By 2010, Irene started contributing to several health websites while completing her personal trainer certification and training for marathons. She saw how certain health variables affected her training and wanted to share this information with the public. Since then, Irene has written various articles about health and fitness featured on different magazines.