Blisters on one’s hands and red sores on the face, especially around nose or mouth can arise due to a contagious bacterial disease, Infantigo. Young children and infants are commonly more prone to this infection.

Skin infection like these makes us and people around us uneasy. One would not like having skin contact with a person suffering from impetigo, whether it means just a simple handshake or any other skin contact with them.

However, if you know a person who has this infection accumulated in them, there are some precautions you would undoubtedly like to consider.

Related Reading: How to Treat While Spots on Face? 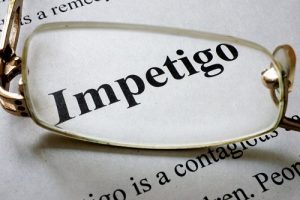 Infantigo gets its name from the Latin word impetere, which means ambush. The two bacteria’s namely, Streptococcus pyogenes and Staphylococcus aureus are responsible for this infection.

Also known as school sores characterized by the patch of red, itchy skin sores which burst and develop honey-colored crusts.

In 2010, Infantigo influenced about 2% of the population, i.e., approximately 140 million people.

Types of Infantigo and their Symptoms

Impetigo can be of two kinds: Bullous and Non-Bullous Impetigo.

The bacteria Staphylococcus produces Exfoliative toxin A, which reduces adhesion, between uppermost layer (epidermis) and the lower layer(dermis) of the skin.

This condition is known as Bullous Impetigo.

Non-bullous Impetigo or Infantigo contagiosa or school sores can occur due to both, Streptococcus or Staphylococcus.

Either of both Streptococcus pyogenes and Staphylococcus aureus can cause Ecthyma.

Sometimes, prolonged bullous or non- bullous impetigo might also result in Ecthyma. It digs deeper into the skin and is more severe than any other form of Infantigo.

Besides the two causative bacteria’s, Streptococcus and Staphylococcus it is not precisely known why this ailment appears.

Some people have a high tendency of resisting impetigo because of their general good health or due to some chemicals applied on their skin. But observation reveals a few of the following causes may act as triggers to Impetigo.

The answer to this would obviously be yes. It is a contagious bacterial skin infection.

A person infected with Infantigo can pass on the virus to an uninfected person through close contact. One needs to stay at home at least until the time up to which it is no more infectious.

Without antibiotics, it is contagious until the time, until the sores heal.

Its existence is most common in infants and children of the age of 2 to 5 years. Adults are not very prone to these infections but can undoubtedly accumulate it in themselves.

However, adults living in dense and humid areas are likely to acquire Impetigo.

Most people carry the causing bacteria’s in their nose. Though it can also cause throat infections, Infantigo spreads through a person infected with it or being in contact with the carrier of the bacteria.

The virus transmits through direct(close) or indirect intermediary. A person with open wounds or cuts has a low resistivity against this disease. After the rash is dry, the bacteria are not infectious to the intact skin.

The diagnosis of Infantigo is essential to take necessary precautions to prevent it from spreading. The doctor would be able to diagnose Impetigo just by looking at your or your child’s skin. He may also ask about recent cuts, rashes, allergies, etc.

Your physician may also remove a part of the sore and send it to the lab for identifying the bacteria. In case of other illness besides Impetigo, he must tell you to perform blood or urine tests.

The procedural diagnosis reveals complete information about the type and severity of Impetigo, whether it is bullous, non-bullous or ecthyma.

The treatment aims at preventing the infection from spreading, improving the appearance of the skin and healing the sores and blisters.

In case of mild disease, it is advisable that you keep your skin clean.

Before using the lotion, the scab needs to be removed gently so that the antimicrobial could be able to reach the under the surface of the skin.

It is necessary to wash the infected area thoroughly with warm and soapy water. The patient should respond positively within seven days.

Oral antibiotics are to given if the patient does not respond to the topical antibiotics. The medicines given depend on the severity of the infection.

The course of antibiotics lasts typically for a week, and it is essential to complete the course even if the symptoms stop showing up in between.

A child can resume his daily schedule of going to school, 24 hours after the antibiotic medication starts.

To speed up the healing process of the sores and to prevent it from spreading and infecting others it is necessary to treat Impetigo as soon as it shows up. Some of the natural ingredients which can help you to recover are listed below:

Its antibacterial and antifungal properties make it one of the best home remedies for skin disorders. A compound, terminal-4-on, also a component of tea tree oil destroys the strains of bacteria and fungi.

To get rid of the itching impetigo infection one should add 2-3 drops of tea tree oil to a tablespoon of coconut or olive oil and apply it to the affected area 2-3 times a day to relieve the itchiness and continue applying till the itchiness has gone.

It is also an essential oil which works against the bacteria. Just like tea tree oil, it is used to heal skin infections and kill the bacteria.

Lavender oil has worked well in destroying the bacterial skin infections and has some anti-inflammatory properties that help in reducing the redness of the skin and swelling.

One can directly apply one or two drops of lavender oil on the blisters and the sores to heal the lesion. If the infection spreads over a large area, then you need to mix 2-3 drops of lavender oil with a tablespoon of coconut oil and apply. It will help you to battle inflammation and pain.

It treats inflamed and infected skin. The fatty acid of the coconut oil makes it a useful medicine for healing the damaged skin.

It has a compound called monolaurin which acts as an antibiotic to kill streptococcus and staphylococcus bacteria in impetigo infections.

One can directly apply the virgin coconut oil on the infected area to reduce the symptoms. The soothing property of the coconut oil helps to relieve the soreness and itchiness of the skin.

Garlic is a natural antibiotic which destroys the bacteria which causes itchiness, redness and swelling in impetigo. It also reduces the amount of pus formed in the sores.

To use garlic as a medicine, mix the crushed garlic with coconut oil or any other carrier oil. Apply this mixture two times a day until the crust has completely gone off the skin.

It helps to fight the bacteria, prevents the growth of microbes, heals the infected skin and soothes the itchiness of the skin. It is directly applied to the surface to stop the growth of bacteria on it.

Manuka honey is considered to be the best honey and an infection-fighter which fights against Streptococcus and Staphylococcus bacteria.

Manuka honey is also an excellent home remedy. Try applying it 2-3 times a day directly on the sores. Its antibacterial properties inhibit the growth of microbes and heal the blisters faster.

Apple cider vinegar can be used raw to treat the sores of the infected region. The acidic content of apple cider vinegar soothes the skin and reduces redness. It is a handy antibacterial treatment home remedy for skin infections.

It is very rare for any complications to occur. But if they happen, they are meant to be very serious and severe. The possible complications are as follows-

If the S. Aureus bacteria keep growing in number and infecting deeper layers of the skin, then it’s time to know that impetigo had developed into a severe complication called cellulitis, characterized by red, inflamed skin pain, and fever.

It is caused by Streptococcus pyogenes and is very uncommon. Its symptoms include pink rashes over the body, vomiting, and pain.

It is an infection of blood vessels in the kidney that can turn out to be severe and harmful to adults. Dark colored urine and hypertension are some of its symptoms.

It is suggested to hospitalize the person suffering from Post-streptococcal glomerulonephritis, to allow the continuous monitoring of their blood pressure.

Staying hygienic and clean is a good habit as well as it saves us from a large number of diseases. So, the first step of preventing Impetigo is to stay hygienic and tidy.

If you get any cut on your body, wash it properly, apply the cream and keep it covered to prevent the bacteria from getting onto it.

If somebody has impetigo, you need to maintain a distance and stay away from his or her belongings. Some of the measures that can be: