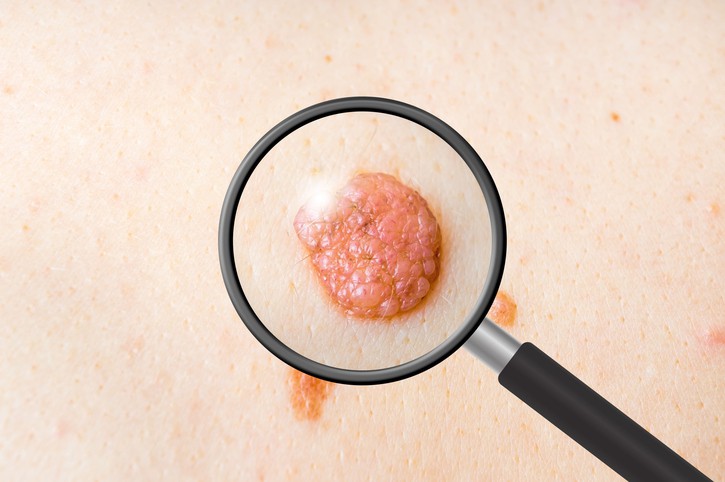 Red moles, otherwise known as cherry angiomas or blood moles, look scary. People are often concerned about the moles and feel that they are cancerous.

Some moles are present since birth, some develop over a period, and some appear and disappear naturally. Most of the time the moles are benign and there is no reason to panic.

Red moles are clusters of blood capillaries on the skin. They are common in people over 30 years of age. These moles are usually found on the torso, arms, and shoulders and may be found anywhere on the body.

They can range from a pinpoint to ¼ an inch in diameter. They can bleed easily when scratched, rubbed or cut open.

The moles occur as raised bumps or flat red spots and are usually circular. They tend to increase in number as you age. In this article, the cause, treatment, and prevention of red moles is discussed. This will include some information about how to treat them naturally.

Some remove the moles for health reasons, and some for cosmetic reasons, even if they pose no health risk. It’s always a good idea to see a doctor if you are concerned.

Red moles can appear due to a number of reasons which can vary from poor diet to old aging. Some of the reasons are discussed here.

The appearance of red moles can indicate that your liver isn’t functioning the way it should. In this case, the underlying liver issue causes more concern than the mole.

Too many ultraviolet rays can cause cherry angiomas. That is why it is important to protect your skin from the sun. Moles caused due to sun exposure are more likely to be cancerous.

Excess toxins stored in the liver or intestines from poor eating habits can cause red moles. Simply switching to a healthier diet can help prevent red moles.

If your genes are the cause of red moles, then there is no way to prevent them. However, they can be removed.

As mentioned earlier, red moles are more common after the age of 30. As in the case of heredity, there is also no way to stop red moles developed due to increasing age.

Women, in particular, undergo hormonal changes, either during pregnancy or menstruation. Hormonal changes occur in men too. These hormonal issues can cause red moles in both men and women.

Anxiety, stress, and depression can also cause red moles. They can appear psychosomatically.

Are red moles cancerous is a common concern when it is first discovered. As mentioned earlier, most people are worried and consider these moles to be cancerous. Color, shape, and size indicate whether a mole is cancerous or not.

If they are small, symmetrical, and multicolored, cancer is a possibility but not a definite problem. That being said, cherry angiomas are usually the result of aging and are not typically cancerous. Even so, a regular checkup with your doctor is a good idea to keep track of any moles on your body.

Natural Treatments to Get Rid of Red Moles

If you see your doctor and make sure your red moles are benign, there are some home remedies that you can use to treat them. The moles can be conveniently treated at home. Let us see few home remedies for cherry angiomas removal:

Dip a cotton ball in apple cider vinegar and place over the mole. Use a band-aid to keep it in place. Try this for four weeks or until the mole falls off.

Gently rub the top layer of the skin of the angioma with a file. Dip a cotton swab into the peroxide, and rub it into it. You can repeat this three to five times a day until it falls off. Be sure to use 35% food grade hydrogen peroxide.

Leave a piece of garlic attached to the mole with plaster at night. Wash it off in the morning. Repeat this process for two weeks to get rid of the mole.

Apple juice contains acid. Apply apple juice using a cotton swab on the mole. Repeat it three times a day for three weeks. This will dry the mole, and it will eventually fall off.

How to Prevent Red Moles?

It’s often said that an ounce of prevention is worth a pound of cure. This is true for red moles, too. There are a number of things you can do to prevent red moles from occurring or increasing in number.

If you are not comfortable with a home remedy, then medical help is available for the removal of cherry angiomas. This will cost more than doing it at home, but it may be more effective and gives instant results.

It is a non-invasive surgery in which a small probe is used to burn off the mole. The mole is removed instantly, and it doesn’t require repeated visits to the clinic. Also, it doesn’t leave any scars.

Cryosurgery is used to treat a number of medical issues including cancer and wart removal. The mole is frozen with liquid nitrogen. This method is quick but causes numbness for some time.

This is where the mole is burned off using a concentrated beam of light. The beam of light gets converted into heat and burns off the mole. This method of mole removal is similar to electrocauterization but may need more visits to the doctor.

In this method, the mole is slowly cut off, one small layer at a time. This method is uncommon as it tends to leave scars. It is used if the moles are raised which makes slicing them easy.

This is where the top layer of skin is removed, allowing new skin to grow in its place. This will dim the appearance of some moles.

How to Tell If a Red Mole is Dangerous?

Red moles are usually harmless, but in some cases, you may want to see a doctor right away. You should keep a check on the size, color, and location of the moles. If the moles show the following signs then you should consult your doctor:

Cancer is scary, and it is well known that moles may cause cancer. That is the reason why worry often accompanies the mole. But you should keep in mind that most red moles are benign. Skin changes as you age and there is no need to panic over red moles.

There are many simple remedies and few medical treatments that can remove unsightly red moles. A checkup with your physician is not a bad idea when it comes to moles. If there is an actual problem going on, you will catch it early.

LALIBERTE, M., “This Is How to Get Rid of Those Bright Red ‘Moles,’ According to Dermatologists,” Reader’s Digest web site; http://www.rd.com/health/conditions/cherry-angioma-removal/, last accessed Aug. 15, 2017