Sometimes, we come across people who have a nose that is differently shaped, or slightly larger. Though this can be simply a genetic trait, it can also be a medical condition known as “Rhinophyma”, also referred to as bulbous nose.

To put it simply, rhinophyma is a skin condition wherein the tip of the nose grows in size and becomes roundish in shape.

A bulbous nose is more commonly found in men than women, especially men 25 to 50 years of age.

Related Reading: How to Remove Blackheads at Home Fast, Easily? 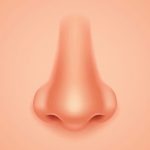 What Is Bulbous Nose?

Rhinophyma, or bulbous nose as its commonly known, is a skin disorder that causes a large, red and bumpy (or bulbous) nose.

While the exact cause of bulbous nose is unknown, it is considered to be a subtype of rosacea (a common, chronic inflammatory skin condition).

According to the National Rosacea Society, more than 16 million Americans are affected by this disease. Rhinophyma is identified as subtype three of rosacea, and it forms gradually over several years.

A bulbous nose does not develop overnight; it grows gradually, and there are specific signs of a bulbous nose that one must look out for, especially in its initial stages. Some of the common symptoms are:

This is the first, and probably the most apparent, sign of bulbous nose. The nose begins swelling and gradually increases in size until the patient undertakes a proper course of treatment.

Swelling begins with the tip of the nose; the other parts get progressively affected.

Another symptom of a bulbous nose is the appearance and increasing visibility of sebaceous (oil) glands on the tip of the nose.

While these normally stay hidden under the skin, they become more visible as yellow bumps for those suffering from this condition.

Some redness may develop around the swollen parts of the nose. This redness may be accompanied by pain also.

4. Thickening of the Skin

Swollen skin starts becoming coarse and thickens a few days into the condition. Its color may also change as pores develop on it. The texture of the skin will also worsen as the condition worsens.

As oil glands develop in the infected area, the skin will develop a more yellow and waxy appearance.

Sometimes, not just the nose, but other parts of the face may also become flushed.

For instance, parts of your cheeks may become red when suffering with rhinophyma, but this flushing may only be a temporary occurrence.

As previously mentioned, not much information is available about what causes bulbous nose. However, it is acknowledged as a severe form of Rosacea, and factors that trigger Rosacea act as triggers for the bulbous nose as well.

Let’s look at some of these factors:

Who Gets Bulbous Nose (Rhinophyma)?

Like most diseases, there are some risk factors that one must keep in mind. Risk factors for bulbous nose include gender and age. Men have more chance of developing rhinophyma than women.

Bulbous nose, as a condition, develops after the initial stages of Rosacea have set in, normally between the ages of 25 and 50. However, gender and age are not the only factors for developing rhinophyma.

The racial background can also play a part in the development of this condition. Rhinophyma commonly affects people who have fair skin, such as the Irish, English, Scottish, Scandinavian, and Eastern European.

Does Alcohol Play a Factor in Bulbous Nose?

It is a common belief among many that bulbous nose and alcohol are connected. However, according to John E. Wolf, Chairman of Dermatology at Baylor College of Medicine, alcohol does not cause Rosacea and is not a direct cause of bulbous nose; it only triggers the condition.

In fact, sunlight, heat, and environmental stress are more immediate causes of this skin condition.

Additionally, it is important to remember that not all alcoholic spirits have the same effect on skin conditions. For instance, the reaction of red wine to the skin is 76%, while vodka is 33%, and scotch is 21%.

For instance, some people experience less swelling, while others experience all symptoms in the extreme.

Consulting a doctor is important. Thorough examinations by a physician, such as a biopsy, can be very useful in determining the exact cause of the condition.

Some types of bulbous nose treatments are:

Treatment of rhinophyma requires oral doses of antibiotics, which help by reducing inflammation and redness.

Some antibiotics which are commonly prescribed to control the condition are erythromycin, tetracycline, and minocycline. Medicines like benzoyl peroxide, tretinoin, or metronidazole work well for swelling.

Many people are terrified of surgery, while others cannot afford the medical bills that follow them. Fortunately, there are alternatives such as injectable rhinoplasty or dermabrasion.

Injectable rhinoplasty corrects the condition without surgery and costs less than surgery by almost half. Dermabrasion involves removing the top layer of skin using a small rolling tool.

Surgical treatment of a bulbous nose usually involves a traditional surgery aimed at reshaping the nose.

Doctors might also suggest a laser resurfacing to remove the outgrowth of tissues. Cryosurgery is another painless surgical method of removing abnormal tissue growth from the nose.

We have established that bulbous nose is a subtype of Rosacea. Therefore, preventing Rosacea from developing is an essential step towards preventing bulbous nose.

Additionally, it is advisable to avoid beverages with elevated levels of caffeine, be extremely careful when making the transition from an extremely hot environment to a cold one, and do not over expose yourself to sunlight for extended periods

Experts also recommend a healthy skin care routine, especially for individuals suffering from Rosacea. They often prescribe regular use of sunscreen with SPF 15 or higher. Skin moisturizers and proper eye care should also be used.

Lastly, it is important to educate yourself and others about the causes of rhinophyma, especially to remove social stigmas prevailing in society against the condition.